Oh my god. It's full of cringe.

No longer active. I'm to busy adulting to blog. Sorry.
Posted by Justin L. Dew at 5:20 PM No comments:

Well, I started this month fully intending to do NaNoWriMo, National Novel Writing Month. It's a challenge, held every November, where contestants write a 50,000 word novel in a month or less. The first few days I did pretty well. Then I started a new job. Due to my schedule, I'm not able to write at. While I'm still hoping to finish my current WiP by the end of the year. It looks like NaNo is a lost cause. So here's hoping to 2014.


The lump loves the worry inside the resident food.
Posted by Justin L. Dew at 9:40 AM No comments:

Any of you who read the blog, I have a few followers, so I know I have consistent readers, have seen my ads in the sidebar.
Well these aren’t cuttin it. So I’m moving to monetize this blog. So, I’m going to start posting a few sponsored links through commission junction, and a few sponsored posts through pay per post.
That’s all.

A question for my readers.

I'm posting this from Droid, so bear with me.

Okay, I was going through a magazine and I saw a device for the iPad that was thirty dollars and would let the kid draw on it.

What ever happened to watercolour paints and sidewalk chalk or letting your kid get dirty?

I mean, it didn't hurt me any, and you can't put a iPad on your fridge.
So my question is,  when you/if you have/ plan on having kids, do you plan on going/ are going the technological route or are you doing things the let-em-get-dirty "old fashioned" route?

Let me know in the comments below or facebook/twitter.

Labels: musings, technology, the future, things that bug me

Wow, I've been under a rock.


Now, this summer has been crappy for television. Falling Skies was mostly meh, True Blood was annoying, and Master Chef isn't finished yet. (Yes, I do watch reality TV shows, but only like three of them.) 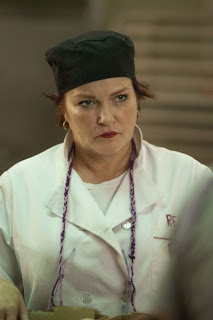 So, I was browsing across Netflix, and somehow I haven't watched their newest series. (Orange is the New Black)

This is one of those prison drama shows, like Oz. It was a bit before my time, it had male nudity, and it was totally off the rails the last couple of seasons.

Now I guess it's an okay kind of show. It's not my cuppa, but it's got great dialogue. Anyhow I was watching it, and I realized, I knew that Russian.


It was Kate Mulgrew. She was awesome. I'm glad of this.

Now I've watched Voyager (yet another Netflix binge) and I HATED Katherine Janeway, absolutely hated her.

I didn't like Voyager either. It was probably the only series ((well the OS was crap too) There. I said it. Strip me of my geek cred.) Where I WANTED the ship destroyed.

Anyhow, after watching her portray the russian chef who could, I'm glad I found out it was the character.

That was my summer in television.

I'm still blogging. I just haven't had any ideas about what to blog about. In the mean time, I've been working on a few things.

My WiP which has been burning a hole in my keyboard since December is being edited, and I've started a Facebook page. Seriously, go check out Insert Witty Comment.

I also have started a tumblr. It's great, I post pictures, songs and odd things I find.

Now, what do you think I should blog about? Suggest it in the comments.